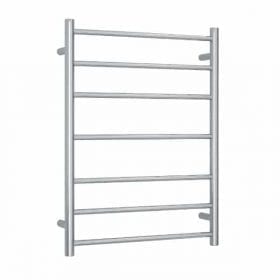 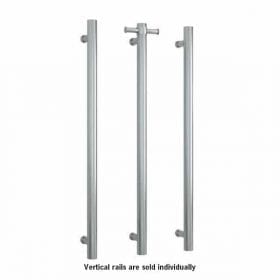 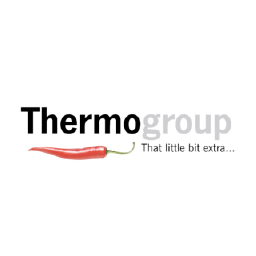 Most orders are shipped in 1-3 business days*

Heated Towel Rails are an affordable luxury for every bathroom for warming and drying your towels. The SS4412 Heated Towel Rail is a 600×800 7 bar polished stainless steel ladder rail.

The SS4412 electric towel dryer is a 12V unit, this means that it can be installed close to a wet area in the bathroom. The rail comes supplied with a transformer which reduces the incoming voltage from 240v to 12v. The rail will still operate at the same temperature and use the same amount of electricity as an equivalent 240v rail as the wattage is the same, however, the rail is operating at a lower voltage.

The rail has a wiring point on both the left and right-hand side of the rail and can be wired at either the top or bottom of the rail. As it is a 12v unit and needs to be wired to a transformer the rail can only be hardwired.

The electric towel rail is designed to rapidly heat up and reach a temperature of around 45-55 degrees. The rail can be operated using an on/off switch however we recommend using a timer to allow you to set and forget and control your running costs. As the rail is electric it is very energy efficient and can cost as little as a $1 a week to run.

Product Code
SS4412
Output
90Watts
IP Rating
IP55
Warranty
10yrs
Lead Length
1.5m
Voltage
12Volt
No of Bars
7
Wiring Type
Concealed (hardwired)
Wiring Position
Any of the four mounting positions
Distance Between Mounting Points (Top to Bottom)
600mm
Distance Between Mounting Points (Left to Right)
570mm
PLEASE NOTE: Specifications are for information purposes only. Whilst every effort has been made to ensure the product specifications are accurate, due to continuing product development and improvement the specifications are subject to change. Specifications can be used to rough in and fit timber supports in the wall however we recommend no holes are drilled without having the product on site or verifying the details with the manufacturer. Thermogroup cannot be held liable or responsible for errors due to updated specifications.

How do I control my heated towel rail?
Thermorails are safe to be left running continuously however most times it is preferable to have the ability to control when your heated towel rail is on and off and thus saving you energy. The majority of the range of Thermorails don’t have a switch on the unit but can be very simply wired to a standard switch. Alternatively, you can wire the Thermorail to a timer that can be programmed to turn on and off to suit your lifestyle.

Do I require a transformer?
Yes, the 12Volt ladder rails need to be wired into a 12Volt transformer, however this is supplied with the heated towel rail so there is no need to purchase this separately.

How many single bar towel rails can I have in a set?
The number of Single Bar 12Volt Rails that you include in a set is only limited by your imagination. To dry and warm your towels effectively you will need a minimum of 3 rails per set.

There are no reviews yet. 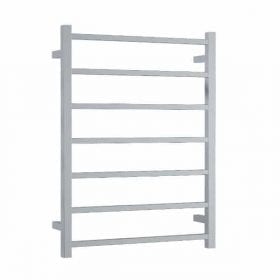